Driving Tip of the Moment:
What you Look Like After a Head-On Collision 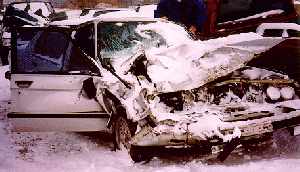 Here is Karl's story:
"I had been carpooling with Mike A. since October. That day was no different than any other. We were heading west on I-74 nearing the junction of Highway 75 near Jamestown, IN at about 7:15 A.M. It was still dark. The first sign of trouble that I saw was the lights of a pickup truck already in the median. It seemed to be coming across at nearly a 45 degree angle. I hit the brakes and headed left, but I knew I'd hit it. As I hit the brakes I thought 'this isn't going to do any good.' We were so close I'm sure were still above 60 MPH when we impacted."

Pretty incredible, huh? Look very closely at the picture - you'll see that the car is bent in half! The driver essentially walked away, and while the passenger had more severe injuries, none were life-threatening or permanent. These two gentlemen were in a car whose chassis was designed in the late 1970s - the engineers who designed it cared about the lives of their customers. These cars were designed to survive a severe crash, as long as the occupants wore seatbelts. This was long before airbags were the latest safety hype. While the Big Three automakers in the USA are nitpicking over airbag standards, people continue to die in their cars.

So these two wore their seat belts. The pickup driver wasn't so lucky. Here's the rest of the story:

"We later found out that the accident was initiated when the pickup truck came down the ramp from 75 onto eastbound 74, but was driving slowly. A semi truck hit the pickup from behind and sent it into the median. The pickup driver was not wearing a seat belt. I've heard that he tore an artery in the accident and suffered a stroke at the hospital. Talking with the insurance company recently I was told that he is living with his parents, in rehab three days a week, and is expected to recover."

So, why is it that certain car manufacturers got it right twenty years ago, and The Big Three still can't figure it out? They're always sacrificing safety for style, hoping that they can sell us cars with flashy plastic hubcaps, rebates (a sick admission that they overcharged us in the first place), and in-your-face advertising. Safety is always an afterthought. For example, their flagship models all use deeply sloping front windshields, and performed terribly in the crash tests. And they continue to promote these types of designs. Read my article on seat belt design to learn more about the lies they perpetuate.

Remember, buckle up. There's just no way around that. This is real life - you rarely get a second chance. If your car's seat belt is designed poorly and/or hurts you, send me e-mail. Maybe I can help.